The Armour of God

When I was a teenager having a rough time at school, my youth worker told me about the armour of God passage in Ephesians 6 and suggested reading it every day before I went to school. I did as she suggested and took great comfort in the power of the words, believing God was protecting me. I read the passage so often that I memorised it, and every day on my walk to school, in the alley-way between mine and my friends house I would pray it as a prayer. I would picture a strong belt being tied around my waist, a huge shining breastplate covering my chest, a heavy, thick shield in my hand, a beautiful helmet on my head and a deadly sword in my other hand, glimmering in the sunlight. I was covered in the armour of God and no one at school could touch me.

Sometimes it felt like it wasn’t working. Things were still tough, bad things still happened and it was still a really tough time. Some days were okay, but some days were awful.

Since my teenage years I’ve reflected often on this passage and if I’m honest at times I’ve questioned why this spiritual armour didn’t seem to protect me at all. God protecting us is a funny thing. On one hand we’re told that God will protect and defend us, but then things happen in life where we don’t feel protected or defended at all. Jobs can be lost, loved ones can be taken from us, relationships can break down, disease can harm us and people can mistreat us.

Paul (the writer of Ephesians) starts off the passage in Ephesians 6 by reminding us that we are in a battle and that battle is not against flesh and blood but something way darker – the schemes of the devil himself. Rulers, authorities, powers and forces of evil in heavenly realms. Scary stuff. To be able to stand against this, we need the full armour of God. A belt of truth, breastplate of righteousness, our feet fitted with the readiness that comes from the gospel of peace, a shield of faith, helmet of salvation and the sword of the Spirit which is the word of God.

When I think back to those tough times as a teenager, there were times when I did feel supernaturally protected by God. On a youth weekend away to the coast organised by my church, I was right in the middle of dealing with a horrible situation, during which I decided to involve the police who charged a girl in my year with assault. My peers were divided between those who thought I was a ‘grass’ and those who knew what this girl had done and could see she deserved justice.  After the weekend was over I knew I would have to go back to face it all. I was walking along the beach telling God I couldn’t go back unless he went back with me, that I needed his help and protection to get through it all. I was almost at the end of what I could cope with, and I was pretty much on my own. As I looked back towards the shore I saw a huge white figure, about eight feet tall, so bright I couldn’t look at it for long and so I looked away. I suddenly felt God’s presence so strongly I couldn’t stand up, and I heard ‘He’s going back with you’ gently whispered in my ear! Despite trying to argue it away with my cynical mind, I couldn’t argue with how I felt and what I had seen, and some amazing ‘coincidences’ happened over the next few weeks that helped me cope with school until everything had calmed down.

As well as times like that, I remember how vital my own actions were. There were so many times it would have been so easy for me to use all of the tactics that had been used against me. I could have got older friends from different schools to ‘sort out’ the people that were hassling me. I could have punched back, I could have retaliated with better insults, more manipulative games, I could have let myself hate those people. Sometimes I did all of those things, but they never helped me, and they never protected me. But when I responded to hate with love, when I reacted to judgement with grace, when I stood up for what was right, when I let peace guide my decisions, when I made a choice to believe things would get better, when I stopped trying to control every situation in my life and let God do the guiding, when I dived into the bible and let it mould and shape me…things were good. Not easy, but good, and I ended up stronger, wiser and completely anchored in God. I do believe there were times God protected me, even though it doesn’t make complete sense and I still have a lot of questions about it. But I believe I was protected by God through my own choices as well, when I chose to do the right thing instead of the obvious thing. 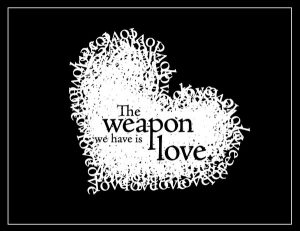 Sometimes when we feel attacked it’s so easy to pick up the weapons of the world. To argue, shout, scream, lie, manipulate, control, backbite and scheme…but these are not our weapons or our defence. We are in a battle, but we are part of an army that fights with different weapons than the world. We fight with love and we are defended by the choices we make. In the story of David and Goliath (read it here) everyone expects David to take King Saul’s armour and weapons. It would have been the best of the best, the most technologically advanced form of protection in the world. But it didn’t fit and David couldn’t wear it. It just wasn’t him, it wasn’t the way he fought. Instead he chose to do it God’s way and armed with nothing but his knowledge as a shepherd, some stones and a slingshot, this teenager defeated one of Israel’s most feared enemies.

I am convinced that protection comes when we relentlessly sow the seeds of the kingdom in our lives, when we truly live out what it means to follow Jesus, when we make the tough choices, when we reject the weapons of the world even when they seem so easy and familiar to us. When we fight and defend with what God gives us, what we can achieve and resist is immeasurable, unimaginable and untouchable.