One of the best pieces of advice I’ve ever been given, is that ideas you have now, are not always for now. Sometimes an idea needs time to grow, evolve, develop. It needs to be pruned and refined. It needs to be pulled apart and criticized by people who love you and understand the context of the idea. I love ideas. I have them all the time. Sometimes I have so many ideas they drive me insane. I am thankful for my ‘ideas’ notebook, which is filled with projects, dreams, film ideas and book plans. Some of those ideas have been done, some of them will get done and some of them may never happen. Ideas are fun.

I want to tell you about one idea, because it’s an idea I would like to be refined and pruned. It’s one of those ideas that won’t leave me alone, and I think that even though it’s kind of a big one, one day it might actually happen. It’s shaped from all the different parts of me – my experience as a youth worker, my love of art, film and creativity, my desire to see as many people as possible come to know and love God in a way that is meaningful and relevant to them…and my weird obsession with abandoned buildings and large empty industrial spaces (I once cried in the Turbine Hall in the Tate Gallery in London because it was so beautiful. It was empty). So here goes, drum roll please, introducing…The Shell. 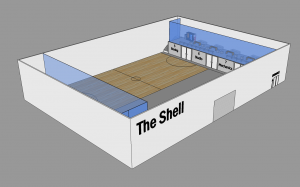 END_OF_DOCUMENT_TOKEN_TO_BE_REPLACED

I was 15 years old, expressing my views rather loudly as normal at my youth group.

That week I had been skateboarding on Nottingham city centre’s Market Square with my friends as usual. Two policemen had approached our group and informed us that we were not allowed to skateboard here, and if we continued, our boards would be confiscated. I told the policeman I would stop skateboarding if he told the mountain bikers across the other side of the square to stop cycling. He told me it ‘wasn’t the same’ and refused to continue the conversation.

My rant became a preach, as I told my friends about the Jesus I knew, who didn’t just love subcultures and marginalized people, but who actually made a conscious and deliberate effort to seek out those people. The Jesus who stepped into peoples boats, who went to all the places no one would go, who got into trouble because of who he hung out with and what he said.

Then came the idea.

A project, run by Christians, not just to include subcultures, but to actually work with them.

It was a great idea. But I couldn’t do it. You see I wasn’t good enough. I was one those ‘annoying’ kids in the youth group. The one who did lots of stupid things and distracted others, the one who questioned everything, the one who was always too honest, about everything. The one who had been through a lot of bad stuff. The one who the youth workers breathed a sigh of relief about when I didn’t show up.

Two years passed, and I was half way through A levels I was failing. My tutor suggested I explored other avenues, my teachers said I wouldn’t amount to anything because I couldn’t focus and apply myself. I had to leave, or they would have made me leave. Which to be honest, was fair enough. Most of the time I turned up stoned, and when I was there I was arrogant, distracting and sarcastic. I lived a double life of being a Christian who went to church on Sundays, but failed miserably to put anything I believed into practice during the week.

I left Nottingham at 17 to take a gap year with the only organisation who accepted year out volunteers under 18 with no money. I was placed with a church, and a Youth for Christ centre. Within six weeks I knew youth work was my calling. I gave up skateboarding, but skateboarders remained burned on my heart. I couldn’t avoid them. I kept thinking about that idea. Someone should do that I thought. But not me, because people like me don’t do stuff like that. I’m not good enough.

I did a second gap year, and during my second year, the national director of Youth for Christ at the time, Roy Crowne, came to speak at an event in our city. We had dinner with him, and I told him about my idea. I got excited as he thought it was good, and said ‘you should do it’. He asked me whether I’d ever written my idea down.

That night I poured my heart out onto a piece of A4. The project would be called ‘One Eighty’. It would provide young people with great skate facilities, but most importantly, it would allow young people the opportunity to turn their lives around, to change their minds, to move from a life without God to a life with God, to ‘One Eighty’.

That night as I slept, I dreamt of a skate event, that I was running.

I saw a set of double doors, with glass windows.

Beyond the glass windows was a massive group of skaters, queuing down some steps, onto the road, waiting to get in. To this skate event, to the first ever ‘One Eighty’.

The next day I marched into the venue and told Roy about the idea. I expected him to take my idea and make it happen, but what he said in response definitely surprised me. He vaguely glanced at the piece of paper I had spent nearly all night working on. And he just said one sentence, and walked off, which I will never forget. “You better get on with it then. Because if you don’t do it, then no one will”.

I had another choice to make.

More time passed, and now I was nineteen years old. I had arrived for my first day at work at Bath Youth for Christ, as their new ‘Skate Outreach Worker’. My job was to turn this idea into reality, to make One Eighty happen, as my placement as part of my youth work degree. I had no qualifications. I was a teenager. I still wasn’t very good at being a Christian during the week. All I had was a desk, and a chair. That was it. No money, no team, no resources, nothing. A broken, unqualified, insecure, lonely teenager, full of pain and questions and anger and fear.

I did a survey of local skaters, to find out their views and needs. I spent time at the skate park getting to know people. I introduced myself at the skate shops. I wrote a business plan. I worked out how much money we would need. There was a lot of zeros. I told the trustees what I wanted to do. They were amazing, and were up for giving it a go. We agreed to hold a test event, where we could try the ramps we wanted to buy, and see whether the need was really there. If there were more than 100 people, then we would go ahead and launch One Eighty as a project.

Five minutes to go and I remembered that I hadn’t put up the signs on the front door. We hadn’t arrived through the front door where the young people would be arriving, we had entered with the equipment through a side door. I walked very quickly with the signs in my hand, and as I approached the entrance my heart leaped out of my chest, and I dropped the signs on the floor.

I saw a set of double doors, with glass windows.

Beyond the glass windows was a massive group of skaters, queuing down some steps, onto the road, waiting to get in. To this skate event, to the first ever ‘One Eighty’.