My Christianity began in a small village church in Nottinghamshire. After re-finding faith as an adult, and now a parent, my Mum felt it was important my brother and I were brought up in the church, and so off we went, every Sunday, to an old little grey Anglican building. I still remember the moss covered path and before it the stone archway that anyone under the age of eleven could be found climbing all over whilst waiting at the end of the service for parents to finish their cups of weak, luke-warm tea, always served in those green cups and saucers that you never see anywhere else.

This little church holds my first memory of communion. The slightly weird thing that all the grown ups did at the same time, in the same part of the same service they had every Sunday. The thing you had to attend special classes to be a part of and you couldn’t even do that until you were in big school. It seemed unfair, and I remember feeling the exclusion of it, eased slightly on the occasions my Dad was brave enough to sneak me a bit of bread he’d put in his pocket at the altar. I’d had it explained to me in Sunday school, that Jesus had this Last Supper thing with his disciples, that he broke bread and drank wine with them, and asked them to do the same when he had gone, in remembrance of Him. I got it, but I never really got it.

Recently I’ve been thinking again about what my Dad did, and how, despite him not doing it with any deep or even faith based intentions, what he did was a beautiful picture of not just the Kingdom of God, or of communion itself, but the deeper, wider, richer sense of communion that means so much to me as a Christian now. It has reminded me that communion doesn’t have to be an empty, duty motivated or meaningless tradition, it is a scandalous, revolutionary, subversive and dangerous act, which, when done with sincerity and understanding, leaves no one the same again. Because of course, like any sacrament, communion is not just about that physical wine or grape juice, those tasteless paper thin wafers or a beautiful, fluffy chunk of a freshly baked loaf, it is an outward sign of something much bigger, something significant and mysterious. Sometimes as Christians, because of the hundreds of times we practice and take communion, we can forget this. We forget some other things too…

We forget who is invited to the table, and to whom the table belongs.

You see with all our religion, rituals, rules, regulations, systems, policies, structures, classes and courses around communion and faith itself…we have ended up excluding the very people Jesus spent most of his time with. The very people the table is for. We think that we get to decide who should be able to take it. We think we have the right to say that some are in, some are out, some are worthy, some are not. We draw lines between secular and spiritual, Christian and non-Christian, liberal and conservative, right and wrong, sinner and saint. We think we get to write out the invites and give them to who we want, when the party isn’t even ours.

While we’re on parties and invites, there’s a great parable Jesus told (you can find it in Luke 14:15-24) about a wealthy Master who was holding a huge banquet for his friends. The invites were sent out, the feast was prepared, but when the time came, they all made their excuses and none of them came. So instead the Master tells his servant to go and find anyone he can – poor, broken, rejected, and they sit in his presence and enjoy an incredible banquet. This is the Jesus I know – whose radical inclusivity turns our exclusive, ‘club mentality’ religion on it’s head. And this is our job today as Christians – servants of a great Master who is throwing a party to which anyone is invited. They just have to want to come. That’s it. Our job is to find someone, anyone, but particularly those who feel they aren’t invited; the rejected, the marginalized, the persecuted, the broken, sick and lonely, and tell them that they are invited! They are welcome at His table. My Dad, without realizing it, did what we are called to do, to fight against systems of control and powerful institutions who think they have the right to write the guest list. We get to steal a scrap of bread and give it to those who others think shouldn’t have it, so they know they are welcome, loved, accepted and included.

We forget we shouldn’t be at the table.

I sometimes think about that first communion, that Last Supper. This was not a quiet, peaceful reverent occasion, where everyone got along and had a lovely time. It was already a table filled with misfits, not good enough and mostly uneducated teenage boys. Even the fact that these young men were Jesus’ disciples was incredible – the opposite of the other Jewish Rabbi-Disciple relationships at the time, which saw only the best, most intelligent, wealthy and studious boys make the cut. Instead Jesus chose (amongst others) some fishermen, a tax collector, a zealot and a guy who he ended up nicknaming ‘son of thunder’ because of his temper. Not exactly ‘the best of the best’.

At this meal, Jesus knew one of those disciples would betray him, another would deny him, three times. But these men were at Jesus’ table, joining in with this meal, part of this revolutionary kingdom that would go on to change the entire course of human history. They weren’t just invited to the feast, they were about to be put in charge of it! They were not past sinners, they were present sinners, and still Jesus washes their stinking, filthy feet, shares a meal with them, and trusts them to spread his message to the rest of the world. Ridiculous.

None of us have earned the right to be welcome at His table. We are not good enough, we are present and future sinners, and yet we are invited to the feast. So why do we think we get to decide who is in or out, in leadership or membership? Jesus’ ‘leaders’ wouldn’t even make the shortlist in most of our contemporary churches. We look for the most talented, gifted, educated and impressive, and in doing this we exclude and reject world changers and revolutionaries. I love the David LaChapelle picture that began this post, because it reminds me who is invited to Jesus’ table, and what a scandalous act of grace it is that there is room for me. Not because of anything I have done or said, but in spite of what I have done and said. Because of Jesus, there is a place at the table set for me. I am invited and I shouldn’t be.

We forget the power of the meal. 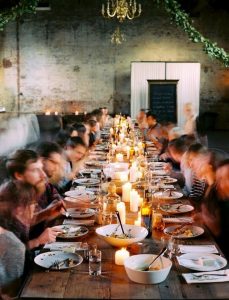 In any church, or communion, or community, you get a lot of different people. People who don’t all think the same things, people who disagree. There are divisions and differences and those things are painful and sometimes, unresolvable. That is really hard, and it costs us. We get wounded and cynical and we feel like giving up on church, yearning for our faith to be simple again. But in communion, we are reminded not of our divisions and differences, but of our commonality and unity. That whoever we are, whatever we think, in Christ we are part of one community, one Body, the Body of Christ. We belong, we are welcomed and we are loved.

There is something mysterious and beautiful that happens around the sharing of food. We all eat it, we are all hungry, we all need food both physical and spiritual. I think communion is a great reminder of this. And obviously this goes beyond a communion ritual on a Sunday. For me it’s happened over a late night curry with friends, sharing a cup of hot chocolate with young people on detached work, eating pizza with a group of skate park volunteers before we let in 40 excited kids, a cup of tea and a slice of cake with my 94 year old Gran, being offered a sweet by a kid I don’t know at my church. These moments transcend our differences, delete our ‘otherness’ and blur our divides. They are holy, mysterious and beautiful. Only communion can do that.

I’ll finish with one final picture, unfortunately a KFC advert, but a great image of how I hope to live. Making room at the table for others, in deep gratitude for my own place there, meeting and encountering others who remind me of all the ways I am the same as everyone else, when everything else in the world seems to want to highlight the differences and push us further apart. Smiling, laughing, eating, celebrating, in the presence of the one who laid the table, started the party and still sends out the invites today.