This article was originally written for and published in the July 2012 edition of Youthwork Magazine.

Whoops. It’s a word I must have used thousands of times in the ten years I have been doing youth work. In the early days I used it probably on a daily basis, with the hope that as I grew in experience and got my youth work degree, I would say whoops, a lot less. Perhaps I make less of the more obvious mistakes now, but I still make mistakes. Whether I like it or not, whoops is still a regular part of my vocabulary.

The mistakes I have made have varied from small organisational errors and badly handled conflict, to deep-seated bad attitudes and reactions to unhealed hurts. Some of these mistakes are funny to look back on and would feature comfortably in an episode of ‘You’ve Been Framed’. Some of them have been painful and costly and are really not very funny at all. But as I look back I realise that whatever those mistakes were, they have shaped me as a youth worker and made me the person that I am. They have helped me to realise not only the importance of making mistakes, but the deeper importance of learning from those mistakes.

Mistakes are always messages. At a youth project I worked in a few years ago, I had faced months of difficult conflict with a group of young people. I had been insulted, threatened, spat on, pushed, had bags of dog excrement thrown at me…for months and as I was the senior worker I always had to deal with any kind of trouble. One night despite every effort on my part to engage these young people and build a positive relationship with them, they went beyond what I was able to cope with, and as my staff and the young people were in danger I was forced to call the police. When they arrived 45 minutes later, one police officer spoke to me very badly, saying I should have dealt with the situation myself and was wasting his time. I lost it. The people that were supposed to be helping and protecting me were now angry with me for asking for their help. The conversation developed into a nasty argument and in full view of young people and staff I lost my temper, shouted and swore at the policeman, who threatened to arrest me. Thankfully a colleague took over and forced me to go back inside. As I sat on the floor in the staff toilet with tears streaming down my face hoping I wouldn’t be spending the night in a police cell, I realised what I had done and I wished I could erase the last ten minutes. But I couldn’t.

Later that week as my amazingly supportive line manager and I sat down to talk about what had happened, we realised some problems that we just hadn’t seen before. I was doing too much, the problems with these young people were not being resolved in any way, I was the worker dealing with it on a weekly basis without any support and I was completely exhausted. I had acted unprofessionally and should not have said what I said, but the mistake told us things, pointed towards areas that needed attention, helped us improve the situation. The mistake had a message and thankfully we heard it.

A simple reflective practice strategy can help us make sense of a mistake. Kolb (1984) developed a cycle that can be useful in helping us reflect and learn from an experience. I include my mistake to show you how it might work; 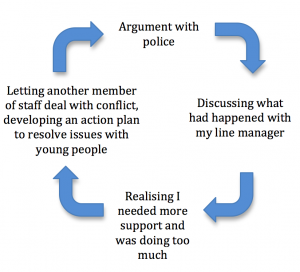 A mistake nearly always forces you to look at the determining factors that led to the mistake. In my example I acted badly and I needed to be disciplined for that, but there was also some responsibility that needed to be taken by my co-workers for not supporting me, my line manager who hadn’t spotted I was doing too much and of course the policeman who perhaps didn’t handle the situation in the best possible way! When someone makes a mistake it can be because they’re too tired, perhaps they are juggling too many things or don’t have the adequate training to deal with a certain situation. If someone you are managing makes a mistake what can you take responsibility for? What can you improve on and what can be changed to ensure the mistake won’t happen again?

When I was 15 I attended a house group that was always the highlight of my week. It was a safe space for me to ask questions, share difficulties and explore God with other people my age, as well as with incredible youth leaders. One night, one youth leader shocked me to my core as she honestly and humbly told us about a mistake she had made in her teenage years. It was something that had deeply affected her, and her marriage.

I couldn’t believe she had done it! I thought she was perfect, holy, a youth worker…not someone who made a huge mistake like that. I didn’t know what to say and as I walked home I felt disappointed that the youth leader I had looked up to so much, was actually just a normal person like me who made stupid mistakes. What a brilliant lesson for me to learn! As I continued to navigate my way through adolescence, I realized that messing up was normal and that I didn’t have to keep it a secret. I no longer saw my youth leader as some perfect role model who I could never be like, but someone just like me, who messed up and needed God. Tell your young people about the mistakes you’ve made, and the mistakes you still make. Obviously respect boundaries, be appropriate and don’t glamorize or belittle sin, but don’t let them think you are something you are not. Young people need to know that people screw up and make it, young people need to know that they are not expected to be perfect and that leaders are not to be put on pedestals, because they have a habit of falling off quite spectacularly. It’s not just young people that need to know this – it’s people in your church, your best friends, your staff and your volunteers. Sharing your mistakes stops people from thinking you are something you are not, relieves you of impossible pressure or expectations and may even prevent someone else from making the very same mistake you did!

It is a myth that Christians never make mistakes. The bible is full of not good enough people who screwed up all the time, that God used and empowered. Peter is often famous for his mistakes – losing faith whilst walking on water, cutting off a soldier’s ear, that whole denying Jesus three times thing.

But after all that, who did Jesus use to build his church? Was it the disciples who got it all right, the ones who gave all the right answers, didn’t ask as many questions and kept their sword in it’s sheath? No, it was Peter he chose. Peter the mistake maker. Peter might have made mistakes but at least he tried. He tried to defend Jesus, he was actually present at the crucifixion, he got out of the boat! He did things, he acted, his beliefs led to him doing. I would rather be someone who makes hundreds of mistakes trying to do something than someone who makes no mistakes doing nothing. 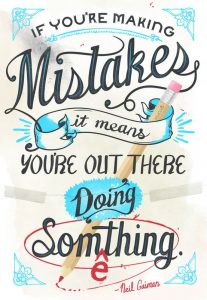 Pioneer ministry is a fairly new term within youth ministry but it’s important to mention it here because mistakes are inevitable in pioneering. Pioneer youth ministry is doing stuff that hasn’t been done before, carving out a new path that has never been walked. There is something essentially pioneering about all youth work, because every relationship you form is a new path, every individual you meet and work with will have totally different needs and responses compared to another. You are constantly pioneering, constantly guessing what will work and not work, what to say and not say, how this person will react to that. There are no maps, no senior workers to advise you or tell you about their mistakes so you don’t make the same ones. If it’s truly pioneering then trying it with a bit of guess work is the only way. Mistakes will be made, because they are the only way you can be lead to something that works, a path that’s walkable that others can follow. In his development of the lightbulb, Thomas Edison famously said, ‘If I find 10,000 ways something won’t work, I haven’t failed. I am not discouraged, because every wrong attempt discarded is another step forward’. It is the destiny of a pioneer to find thousands of ways that don’t work, all so that they can be lead to the one way that will work. Your mistakes will always be the paving slabs the path leading to your successes is made from.

Sometimes it’s hard trying to imitate a sinless savior who in just thirty three years changed the course of human history and enabled a way for broken people to restore their relationship with God. I often feel like I’ll never get it, I’ll never be good enough, and how can Jesus ever understand that? He was perfect, he doesn’t know what it’s like to make mistakes. Or does he?

In Luke 2 we read an interesting story about Jesus as a young person, temporarily separated from his parents only to be found in the temple, listening to the scriptures, asking questions and amazing people with his knowledge. In verse 52 we’re told that ‘Jesus grew in wisdom and stature, and in favour with God and men’.

Really? Jesus grew in wisdom? Jesus could grow in something? Jesus wasn’t born with total and complete wisdom?

Then there is Hebrews 5: 8 – 9; ‘Although He was a Son, He learned obedience from the things which He suffered. And having been made perfect…’ Jesus learned things, Jesus was ‘made perfect’. So he wasn’t before?

I’m not trying to argue that Jesus wasn’t perfect or sinless, I believe he was both. But perhaps this is sometimes the problem in our thinking when we see making a mistake as a sin, rather than just a mistake, inevitable in the process as we learn and grow into the person God is shaping us to be. Making mistakes isn’t failing, it isn’t sinning, it can’t be if Jesus did it.

Jesus was fully human. He wasn’t born potty trained. He had to learn how to walk, to talk, to feed himself, to read, to write. He was a carpenter (or general handyman for the theologians amongst us). I have never trained to be a carpenter, but I did do GCSE Resistant Materials, which is almost the same thing and I was awful at it. It took me months to learn how to saw properly, make joints and hammer nails in the right places. Jesus would have been the same. He probably made some really dodgy tables, the ones where you need a couple of napkins under a leg to stop your dinner from flying off the table with every movement of your leg.

Although perhaps not entirely theologically accurate, I love the scene in ‘The Passion’, where a flashback shows Jesus inventing a high table, different to the others around at the time. It shows the side of Jesus we never see, the one who played and learned and grew, the Jesus who made mistakes and who therefore gives us permission to do the same.